10-GLACIERS IN NORTH DAKOTA – PART ONE

Glaciers in North Dakota: Part One

Glaciers are giant bodies of ice, formed from snow that survives from year to year. Accumulations of snowfall from past years compact into a substance called firn, a recrystallized residue of snow left over from past seasons. During the summers, when temperatures are warm enough for rain instead of snow, the rainfall adds to the mass of a glacier, eventually freezing and becoming part of the glacier. With time and additional snow cover, the whole mass gradually solidifies into hard ice: a glacier.

The color of pure glacial ice, if it is clear and lacking the various rocks and sediments often found in glaciers, is ice-blue. Drop a piece of glacial ice into a glass of warm water and it may literally “explode.” Any air trapped in the ice, thousands of years ago, and pressurized by the great overlying weight of the glacier, escapes with force from the piece of ice as it melts in the glass. By analyzing these trapped pockets of air, scientists can learn what our atmosphere consisted of in the past. 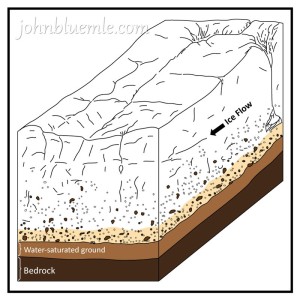 Fig. 10-A. This block diagram shows how glacial ice, as it flows over the surface of the ground, picks up debris from the underlying rock and sediment. These materials become part of the moving mass of the glacier. The bottom part of a glacier may consist of more entrained debris than ice. When the glacier eventually melts, all of the debris it contained is deposited on the ground. Diagram: 1-29-2015

When an ice mass becomes thick enough and heavy enough to flow, it “officially” becomes a true glacier. A glacier flows slowly away from the place where it is thickest. It may flow at a few feet a year although, in some circumstances, the flow rate may be much faster. In the northern hemisphere, glaciers expand mainly southward, away from polar regions because the temperatures to the south are warmer than to the north. A glacier flows most easily when it is warmer and less brittle. It will move much faster at 30 degrees F. than at minus 30 degrees F.

A glacier doesn’t glide placidly over the land. It scratches and grinds the underlying bedrock surface, picking up pieces of rock and soil, dragging them along and using them as tools to scour the ground beneath the ice. 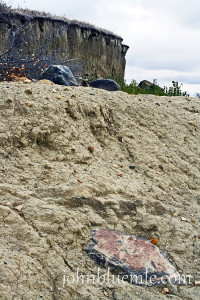 Fig. 10-B. This exposure, along Lake Sakakawea near Riverdale, shows a light-colored till in the foreground that is pre=Wisconsinan in age (more than 100,000 years old). Above, and in the background, is a younger till, probably Early Wisconsinan in age (about 70,000 years old). A quartzite erratic is encased in the till in the foreground. Photo: 10-09-2012.

Glaciers don’t normally flow uphill, but they do fill lowlands and overtop them, much like flood water.

Glaciers in mountainous areas, unlike broad ice sheets in places like Greenland and Antarctica, come with a sense of “scale.” The mountain peaks in the distance and the valley walls that hold the glacier help you to orient yourself. But suppose you are standing on a snow-covered, continental-size glacier (dressed in a heavy parka). You see nothing but frozen wasteland, nothing but whiteness. No buildings, no fences, no trees, no landmarks. Only emptiness. No sound but the wind. On a cloudy day, sky and ice blend; making it nearly impossible to distinguish the horizon marking their boundary. 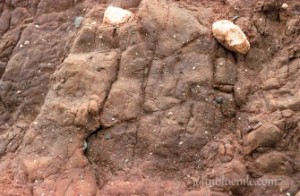 Fig. 10-C. Baked till exposure in Ward County. When a lignite seam just beneath this till burned, it baked the overlying materials, including this till, to a reddish-hued material. Baked till is uncommon in North Dakota but, in this case, the baking helps to accentuate the larger particles (pebbles and cobbles) from the finer-grained groundmass. The till is probably Late Wisconsinan in age; it was probably baked sometime during the past 10,000 years. Photo scan 1965.

By the time each glacier advanced, the land ahead of it may have become deeply frozen permafrost and, as the ice moved over the frozen rock and soil, it picked up chunks of these materials, incorporating them into the glacier itself. In the areas where it formed, west of Hudson Bay, the materials beneath the thickening ice were mainly crystalline igneous and metamorphic rocks such as granite and gneiss. Farther south, the glaciers flowed over layers of sedimentary rock.  Whatever the ice flowed over, it picked up some of it and carried it along.

A moving glacier may be likened to a huge excavation and grading machine that does its job of eroding by plucking and abrasion. Plucking, the more important of the two, is based on a freeze-thaw cycle. The cycle begins when downward pressure melts the ice at the base of a glacier. Water seeps into cracks in the rock beneath the glacier. When the water freezes, the expanding ice plucks rock fragments and incorporates them into the debris near the base of the glacial ice.

After a glacier covers an area for a while, and a considerable thickness of ice lies on the land, the materials beneath a glacier gradually thaw, a combined result of the pressure of the overlying ice and the natural upward flow of heat from the Earth’s interior. The ground surface beneath the North Dakota glaciers was not frozen, and the base of a glacier may have been a muddy mass. This facilitated even more sediment being incorporated into the base of the moving ice.

In some places ground water in the saturated sediments beneath the heavy weight of the glacier built up great pressures due to the weight of the overlying ice.

Besides transforming materials beneath the ice into a mud-like mixture, the water, because it was pressurized, tended to force — squeeze–the sub-glacial sediments upward, into the base of the moving glacier. Sediments beneath the ice were smeared out as they were carried along with the advancing mass of ice. 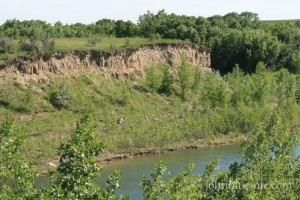 Fig. 10-D. This cliff of till is located along the shore of Lake Sakakawea near Riverdale. When the lake was flooded, waves attacked the shore of what was previously a smooth, grassy valley (Dead Man Coulee). The waves quickly eroded the steep exposure of till. The age of this till is probably Early Wisconsinan (lower part) and Late Wisconsinan (upper part). Photo: 6-20-2009

A glacier seldom behaves like a bulldozer, pushing debris ahead of it. It does, however, incorporate debris as it moves by freezing it onto its base. In whatever way the boulders, gravel, sand, silt, and clay beneath a glacier became part of the moving glacier mass, both ice and sediment flowed forward and the farther the glacier traveled, the more material it accumulates. Glaciers advanced over North Dakota several times, and each time, when they melted, they dropped their entire load of rock and sediment, material gathered from places previously overridden. Some of the material carried by the glacier ended up far from where it had originated. We find rocks in North Dakota that came from northern Saskatchewan, Manitoba, and Ontario. We also find chunks of shale that came from only a few dozen feet away. The sediment a glacier was carrying finally came to rest when the last ice melted.

During the active life of a glacier, every crystal of ice, every boulder, sand grain and fragment of rock within the ice, is moving, slowly making its way away from the center of snow and ice accumulation.

In North Dakota, the movement was generally southward, away from the Keewatin center of ice accumulation west of Hudson Bay. Apart from its overall southward progress, variations in the topography over which the glacier advanced locally affected the direction of flow.

When the glaciers that covered much of North Dakota eventually melted, all of the material they had been carrying was laid down on the land surface where the glacier had been. This included everything from large boulders (erratics) to fine-grained material: sand, silt, and clay. This “glacial sediment,” deposited directly from the melting ice, is known as “till.” Till was deposited as a kind of stony mud that eventually dried out after the glacier melted away. Usually, the till amounted to a few tens of feet of material, but after several glaciations, it might have accrued to several hundred feet: the materials from several glaciations, stacked one on top of another. 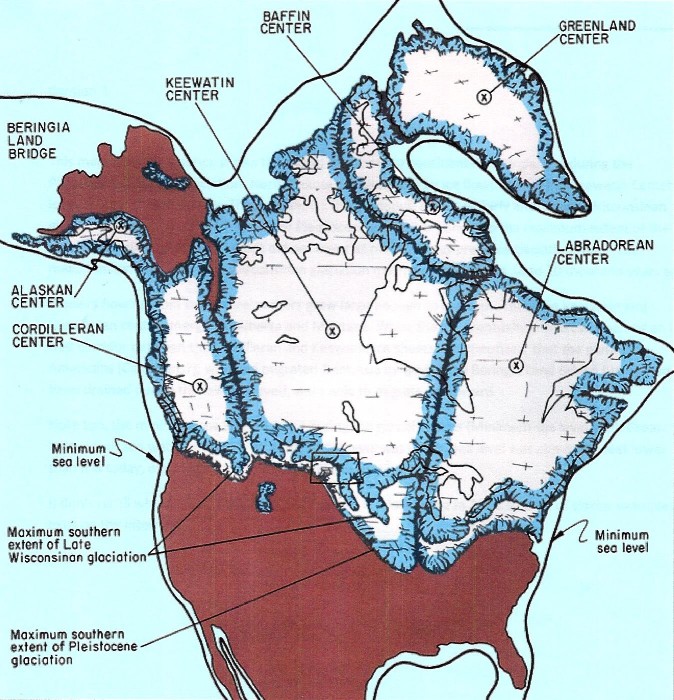 Fig. 10-F. This map of North America shows the extent of the major continental-scale glaciers during the Pliocene/Pleistocene glaciation. North Dakota was glaciated by ice flowing from the Keewatin Center, located west of Hudson Bay. This map shows the maximum extent of Early and/or pre- Wisconsinan glaciers (“Maximum southern extent of Pleistocene glaciation”) and also the maximum extent of the Late Wisconsinan glaciation, which did not cover as much area as previous glaciations had. The maximum extent of the Late Wisconsinan glaciation may have been about 18 to 20 thousand years ago.
Glaciers flowing from the several centers grew large enough to coalesce. Thus, the Keewatin and Cordilleran centers merged in Alberta and Montana. When the ice eventually withdrew, opening an ice-free corridor between the Cordilleran and Keewatin ice sheets, it is theorized that the earliest Americans (Canadians?), who had migrated from Asia by way of the Beringia Land Bridge (which had been drained due to the low sea level), were able to migrate southward.
Note too, the minimum sea level reached during the glacial epochs (Minimum sea level line). Great amounts of sea water were tied up as ice so sea level was lower. Sea level was about 400 feet lower than it is today, exposing much more area on the continents.
(I don’t recall where I found this map, but I used it in a talk I gave in 2013. Dozens of similar examples exist on the internet).