Governor William L. Guy’s secretary thought she felt a sonic boom on Monday, July 8, 1968. The State Capitol Building shook a bit, but most people did not feel the shaking or, if they did, they did not recognize it for what it was, a 4.4-magnitude earthquake. The earthquake was centered just southwest of Huff and it was felt over a 3,000-square-mile area. In Huff, and on nearby farms, the quake rattled dishes, window and wood-frame houses creaked, but no damage was reported anywhere in the state.

At least 12 additional earthquakes have been felt in North Dakota. The most widely felt earthquake in North Dakota occurred at about 9 p.m on May 15, 1909. It was a shock that rocked the northern Great Plains. The epicenter of this tremor was near Avonlea, Saskatchewan, near the North Dakota-Montana- Saskatchewan border. The Avonelea earthquake was felt throughout North Dakota and western Montana as well as in the adjacent Canadian Provinces. It broke windows and dishes and cracked plaster and masonry.

Some of the largest earthquakes in U.S. history, in the early part of the 19th century, were likely felt in North Dakota. They are known as the New Madrid quakes, after the town of New Madrid in southeastern-most Missouri. A series of four strong quakes (and hundreds of smaller ones) occurred – two on December 16, 1811, and one each on January 23, 1812 and February 7, 1812. The largest of the quakes was felt from the Gulf of Mexico to Canada and from the Rocky Mountains to the Atlantic coast. The potential remains for more devastating earthquakes in the New Madrid area, and if that happens, we will likely feel it in North Dakota.

Almost all earthquakes are caused by sudden slippage along faults in the upper few hundred miles of the Earth’s outermost shell (the crust). Most of them occur at the boundaries between the several large plates, which fit together to form the crust. These plates move, in some places pulling away from one another, as along the spreading parts of the mid-Atlantic Ridge, sliding past one another, such as along at the San Andreas Fault in California, or colliding into one another, such as in the Pacific Northwest (the Cascadia Fault in British Columbia, Oregon, and Washington) where the Pacific Plate is pushing under the North American Plate. In all of these, and other comparable areas, the potential is higher for a severe earthquake. 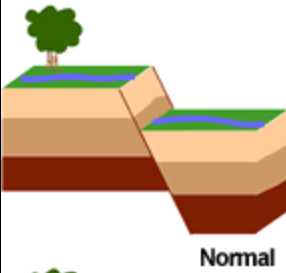 Fig. 13-A. “Normal fault” is one in which one block moves down relative to the other. This happens if the two blocks, on either side of the fault plane, are being pulled apart. Examples of such normal faults in the U.S. are the Basin and Range (including the Wasatch fault in Utah-which has had historic earthquakes), the Napa Valley Fault in California, and the New Madrid area along the Mississippi River (a great earthquake in early 1800s).

Movement along these plates is slow but steady, most of the time approximating one to ten millimeters per year (about the rate at which your fingernails grow), but the continual slow movement causes stress to build. When the stress finally exceeds the strength of the rocks, they break and snap violently into a new position (the last time that happened in the Pacific Northwest was in 1700).The point of rupture, which may be many miles beneath the Earth’s surface, is known as the focus or hypocenter of an earthquake; the epicenter is the point directly above the hypocenter. The process of breaking (known as faulting) creates vibrations called seismic waves. We feel these waves as earthquakes. Earthquakes can occur anywhere enough elastic strain  builds up to drive fracture propagation along a fault plain.

The sides of a fault may move past each other smoothly, without causing an earthquake if there are no irregularities along the fault surfaces. However, nearly all faults do have irregularities, which tend to cause frictional resistance. If a fault becomes locked–“stuck” in place, continued relative motion between the plates leads to increasing stress, and therefore, stored strain along the fault surface. This continues until the stress has risen sufficiently to break through the friction, allowing sudden sliding over the locked portion of the fault, releasing the stored energy.

Large earthquakes are among the most devastating natural events that can occur. If an earthquake occurs near the edge of a continent, it may generate a tsunami, which can result in a massive flood when it comes ashore. Tsunamis are long-wavelength, long-period sea waves produced by the sudden or abrupt movement of large volumes of water. In the open ocean, the distance between the wave crests can be more than 60 miles, and the wave periods can vary from five minutes to an hour. A tsunami wave can travel from 375 to 500 miles per hour, faster in deep water, slower if the water is shallow. Tsunamis can travel thousands of miles across open ocean, inundating far shores several hours after the actual earthquakes that generated them. One of the most devastating tsunamis in recent years occurred on December 26, 2004 as a result of a massive earthquake (known as the Sumatra-Andaman Earthquake), with a Richter Scale rating of 9.3 off the west coast of Sumatra, Indonesia. The earthquake that triggered the tsunami was the third largest earthquake ever recorded and it also had an unusually long duration of shaking, about ten minutes. The resulting 100-foot-high tsunami wave killed more than 230,000 people when it came ashore in Sumatra and Thailand. 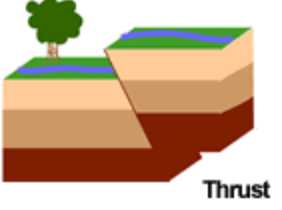 Fig. 13-B. A “thrust fault” is one in which the two blocks are being pushed together. One will push up, over the top of the other – or one might be pushed beneath the other. An example is the Cascadia Fault along the northwest US-Canada coast, where a plate is pushing inland (Oregon, Washington, British Columbia). In Asia, the India sub-continent is pushing northward, forcing the crust ahead of it to buckle, forming the Himalayan Mountain Range.

The seismic waves of large earthquakes can induce natural oscillations in the Earth and cause the entire planet to ring like a bell for hours, or even days. The reverberating tone is much too low for us to hear, but seismographs can record the low-frequency oscillations. The recorded sound can be played back at, say, 10,000 times faster than the original. We can then, as it were, listen to the Earth. It is a strange experience that sounds like being in a forest on a windy day, with occasional brief falling tones and longer, rather melodic tones, similar to an orchestra tuning up. Every now and again we hear sharp noises that sound like a branch breaking. Sometimes we hear sounds like a herd of animals stampeding through a forest, smashing off branches and breaking them underfoot. I have listened to several such recordings. You can access samples of earthquake sounds on a variety of internet sites.

Most earthquakes that originate in North Dakota are probably related to deeply buried structures in the Precambrian basement. These structures contain numerous faults, but because they are so deeply buried, their extent and locations are poorly known. Movement on any of the faults could produce small to moderate earthquakes. Small earthquakes can also occur when layers of sedimentary rock collapse into voids left by the dissolution of underlying salt beds. Northwestern North Dakota is underlain by thick layers of salt at depths ranging from 4,000 to 12,000 feet. Salt is a geologically unstable mineral, readily dissolved in water and, when burdened under the tremendous mass of overlying sediments, it can flow and deform. As the salt moves, the support for overlying layers may be removed. The overlying layers can settle downward gradually, or they may collapse suddenly, creating a comparatively shallow, small earthquake.

Seismographs around the world record earthquakes with a magnitude of about 4.5 or greater; seismic waves of smaller tremors dissipate before being recorded by distant instruments. For an earthquake with an epicenter in North Dakota to be recorded, it would have to have a magnitude of 3.3 or greater. The 1968 Huff earthquake, which I mentioned earlier, is one of only about a half-dozen that have been instrumentally verified to have epicenters in North Dakota, although it is likely that other small reported earthquakes have had epicenters within the state. Tremors of Richter magnitude 3.0 or less are often felt by persons favorably situated, so more small tremors could have occurred in the state than instrumentally-verified records suggest. The only permanent seismic monitoring station in North Dakota is located near Maddock, southwest of Devils Lake.

In 1978, along with Alan Kehew, Erling Brostuen, and Ken Harris, I investigated reports by farmers of loud, “banging” sounds in Emmons and Dickey counties in south-central North Dakota. It was a drought year and cracks formed in fields of alfalfa. We determined that the alfalfa, which has a particularly deep root system, was de-watering the soil, causing it to shrink. The cracks – and the noises – were due to shrinkage of the soil, which caused deep cracks to form. As the cracks formed, material at their edges fell into them, many of which were 10 to 15 feet deep. The banging noises may have been due either to material falling into the cracks or, perhaps, the soil may have pulled apart with force as it shrank, causing the sounds. The occurrences I just described are not earthquakes, as they do not involve tectonic forces. They might be characterized as examples of “pseudo-earthquakes,” or perhaps “soilquakes.” Similar events – landslides, etc. – might also be mistaken for earthquakes. We published the results of our “alfalfa study” in a scientific journal: (Bluemle, J. P., Kehew, A. E., Brostuen, E. A.,. and Harris, K. L., 1978, Alfalfa and the occurrence of fissures on the North Dakota prairies, The Prairie Naturalist, Vol. 10, pages 53 – 59).

As a sort of afterthought, because I am so often asked about it, I’ll add a note on current concerns about possible earthquakes being triggered by hydraulic fracturing (“fracking”) activity in our oil-producing areas. At the depths at which they are performed in North Dakota, hydraulic fracturing procedures are unlikely to cause earthquakes. It is possible, though, that injection of waste fluids into certain geologic formations could trigger small earthquakes, as has been reported in some places (Texas, Oklahoma, Ohio, etc.). The likelihood of a damaging earthquake due to this activity in North Dakota is remote, although pollution of groundwater is possible.

Fig. 13-C. “Strike-slip fault” might result in an earthquake if the right-hand block moves parallel to the bedding, but not up or down relative to the material on the other side of the fault. This is the main kind of movement that occurs along the San Andreas Fault System along the west coast of the United States.

The closest I ever came to directly experiencing a significant earthquake was on September 26, 1997, when my wife, Mary, and I were in Assisi, Italy. We spent several hours sightseeing in Assisi, some of it in the Basilica of St. Francis of Assisi. That evening, while we were staying in Chianciano Terme, a nearby village, an earthquake caused extensive damage in Assisi, killing several people in the church we had been in a few hours earlier.

The United States Geological Survey lists North Dakota among ten states that are least likely to suffer earthquake damage. Some other nearby “earthquake-poor” states include Iowa, Minnesota and Wisconsin. Infrequent, small earthquakes may occur near to and within North Dakota, but unless one occurs in a remarkably unfortunate location, it is unlikely that any serious damage will occur. It ought to be safe to visit churches here.