As you travel through western North Dakota, notice the multicolored layers and brick- or glass-like masses of baked and fused clay, shale, and sandstone. These baked materials, known as clinker, but often referred to locally as “scoria,” formed in areas where seams of lignite coal burned, baking the nearby sediments to a natural brick. Clinker beds range in thickness from a few feet to more than 50 feet in North Dakota, with even thicker beds in Wyoming and Montana. 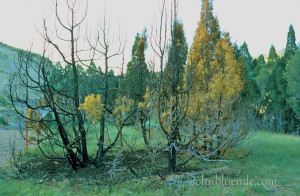 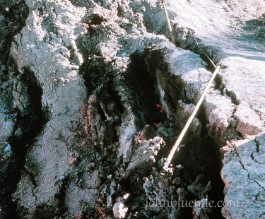 Fig.6-B. Burning lignite vein near Buck Hill in the South Unit of Theodore Roosevelt National Park. Notice the red embers in the dark part of the vein, in center of image. This lignite vein burned for 26 years, from 1951 until 1977. While it was burning, fumes from the burning lignite caused juniper trees in the vicinity to grow in a columnar configuration. Since the fire went out, the trees have reverted to their normal growth habit. Photo scan: 1972.

The first recorded reference to clinker that I know of was by William Clark, who made the following entry in his journal while wintering at Fort Mandan (March 21, 1805):

Saw an emence quantity of Pumice Stone on the sides & feet of the hills and emence beds of Pumice Stone near the Tops of them, with evident marks of the hills having once been on fire. I Collecte Somne of the different sorts i.e. Stone Pumice & a hard earth, and put them into a funace, the hard earth melted and glazed the others two and the hard Clay became a pumice Stone glazed.

When Lewis and Clark arrived at Beulah Bay, about 20 miles west of present-day Riverdale, on April 10, 1805, Lewis noticed a seam of lignite burning along the face of an outcrop. He commented:

“the bluff is now on fire and throws out considerable quantities of smoke which has a strong sulphurious smell.”

I believe it to be the strata of coal seen in those hills which causes the fire and birnt appearances frequently met with in this quarter. where those birnt appearances are to be seen in the face of the river bluffs, the coal is seldom seen, and when you meet with it in the neaghbourhood of the stratas of birnt earth, the coal appears to be presisely at the same hight, and is nearly of the same thickness, togeter with the sand and a sulphurious substance which usually accompanys it.

Following Lewis and Clark, numerous explorers mentioned seeing clinker as they traveled through the region. They included Larocque (1805), Maximilian (1833), Nicollet and Fremont (1839), and Audubon (1843). Some of these explorers believed the clinker beds had a volcanic origin, but Lewis and Clark were correct in their appraisal that clinker formed as clay and sand were heated by the underlying lignite when it caught fire due to natural causes, such as lightning or prairie fires. 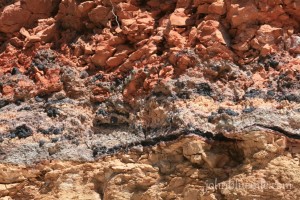 Fig. 6-C. Ash bed remaining after a lignite bed has burned. The ash is mainly the white material, along with some black, unburned lignite. The ash bed is overlain by blocky, red-colored clinker. This ash-bed is exposed along a road leading to the top of Sentinel Butte in Golden Valley County. The location is about two miles south of the Town of Sentinel Butte. Sec. 6, T. 139 N., R. 104 W. Photo: 8-28-2010.

Several early explorers reported seeing coal fires in the northern Great Plains. Over the years, range fires have ignited lignite beds many times. At Buck Hill, in the South Unit of Theodore Roosevelt National Park, a lignite seam burned from 1951 until 1977. During early October, 1976, prairie fires burned over large areas in the southwestern part of the state, igniting underground lignite seams in at least 30 locations over a 7,000-acre area near Amidon. Most of the fires were extinguished before the following spring, but some of them burned for several months. Again, in July, 1988, several lignite seams were ignited by widespread fires in the badlands. Juniper tree roots burning downward from the surface, into the coal, ignited some of the fires.

Burning lignite is limited to depths where adequate air circulates from the surface. The level of the water table may control this depth (burning can’t take place in water-saturated materials). While veins of coal are burning, fumes from the smoldering coal can alter the growth habits of nearby vegetation, causing it to grow in unusual shapes. After the fires go out, the vegetation reverts to its normal shape, common elsewhere in the badlands. Near Amidon, a stand of junipers grew as columnar-shaped trees for many years while a nearby lignite seam burned, producing ethylene gas, which altered the growth habit of the trees. Since the fire went out, the trees have resumed their normal, more bush-like shapes.

Heat from burning lignite beds hardens, melts, or sinters the overlying and surrounding rocks into brick or glass. Sintering is a process that fuses material into a hard mass, without melting it, much like bricks are baked in a kiln. When lignite burns, it may be transformed to an ash bed that takes up only a fraction of the space the lignite did before it burned. Thin layers of white ash, mostly potash, lime, and other inorganic, non-combustible minerals, can sometimes be found at the base of clinker beds. 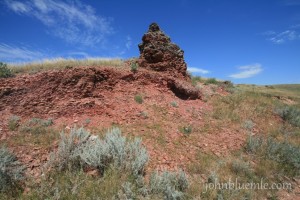 Fig. 6-D. This example of a clinker “plug” is in Golden Valley County. Plugs like this one probably formed when overlying sediment fell into a hole in the burning lignite seam beneath it where it was heated more quickly and to a higher temperature than the surrounding beds. After the clay has been baked by heat from burning lignite, it has many holes and crevices. This exposure is along the road leading to the top of Sentinel Butte. Sec. 6, T. 139 N., R. 104 W. Photo: 7-28-2014.

The baking process oxidizes iron-rich minerals, mainly to red shades, but black, gray, purple, yellow, and other hues are common. The hue and intensity of the colors depends upon the mineral composition, the grain size of the material that was baked, and how hot a temperature was reached during the baking process. The brick-red color, which is most common, is due primarily to the presence of the mineral hematite (iron oxide: the same as common rust). Following a rain shower, wet clinker beds are much brighter in color.

By the time the materials overlying a burning lignite bed cool and collapse, they are hard, and usually partially fused by baking. As they slump, falling into the burned-out space, the baked, melted, and sintered materials may hold together, resulting in a mass that can be as much as 75 percent air space. After the clinker cools, the empty spaces provide convenient living places for small animals, such as rattlesnakes.

Several prominent clinker zones are found throughout the Little Missouri Badlands. The clinker forms a cap on many hills and ridges over extensive areas. Clinker resists erosion because it is harder than unbaked rocks and also because heating and subsidence during the baking process produce fractures that allow water to infiltrate, minimizing surface runoff. Erosion often leaves clinker as a cap on red-topped knobs, ridges, and buttes standing above the more subdued nearby topography developed on less-resistant, unbaked materials. Some widespread areas of clinker are particularly scenic; good examples can be seen along the Red Hills Road south of Sentinel Butte, along the Bennie Pier road in McKenzie County, and on parts of the Scenic Loop Drive in the South Unit of Theodore Roosevelt National Park. 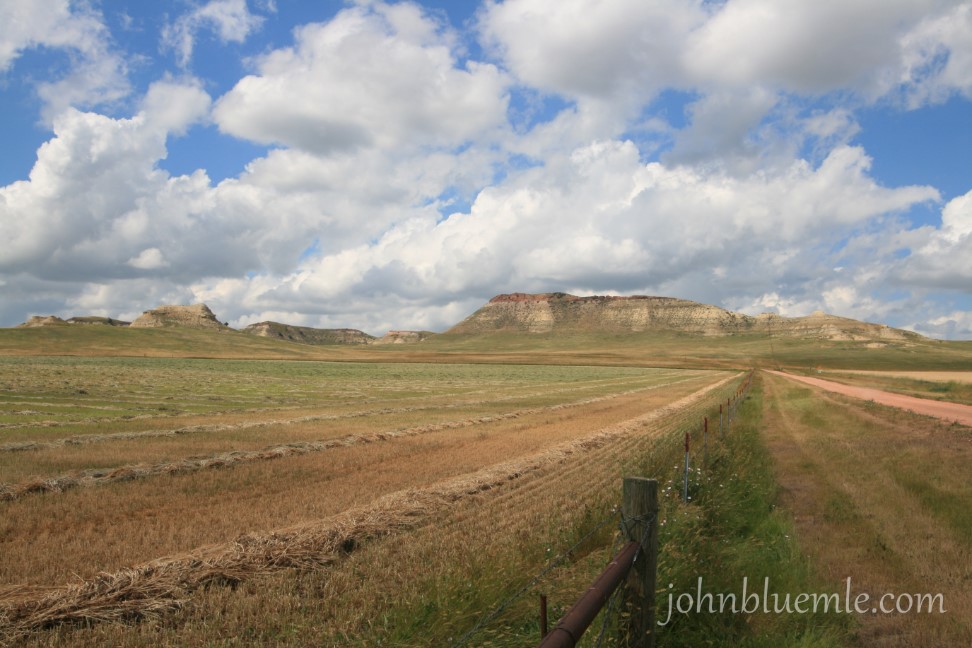