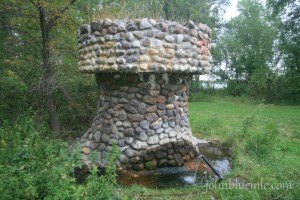 Fig. 3-A. Fountain at Crystal Springs, Kidder County. This field-stone monument was constructed in 1935 by stonemason Art Geisler. It was a Works Progress Administration project intended to replace an old iron pipe from which travelers used to obtain a cool drink of spring water while motoring on U.S. Highway 10. The fountain was listed on the National Register of Historic Places in 2010. The spring was flowing when I took this picture. The water flows from an ice-thrust hole, which intersected a preglacial river valley. Photo: 8-30-2010.

Field stones are common in parts of North Dakota that have been glaciated. Early settlers used the stones for the foundations of their homes and farm buildings and some people built entire structures with them. Today, field stones are used in landscaping, as rip rap along the faces of dams and shorelines, or as decorations in front yards in towns like Bismarck and Minot (less so in places like Fargo and Grand Forks, where they are much less common). 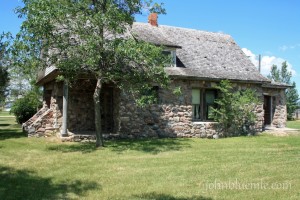 Geologists use the term “erratic” to refer to field stones left behind by glacial ice. The term “erratic,” with reference to rocks, dates to 1779, when Horace de Saussure, a Swiss geologist, described granite boulders lying on top of limestone in the Jura Mountains in Switzerland. He recognized that the boulders were out of place. His term, “terrain erratique,” comes from the Latin erratus, “to wander,” and means, literally, “ground that has wandered.”

In some instances, the source-area of an erratic can be pinpointed. North of Winnipeg, for example, several Paleozoic carbonate limestone formations are quarried. We can determine from which area and formation a North Dakota boulder was derived by matching it to the Manitoba limestone exposures.  Several years ago, Bob Biek, then a North Dakota Geological Survey geologist, found a number of unusual erratics along Lake Sakakawea — dark-colored stones known as “omars.” The name “”omar” is short for the Omarolluk Formation, a 1.76 billion-year-old greywacke formation. The rocks are found in-place (where they originally formed) today only in the Belcher Islands in southeastern Hudson Bay, so it is possible that the Lake Sakakawea omars originated in the Belcher Islands, or near there. The Belcher Islands are located nearly 1,000 miles northeast of Lake Sakakawea. 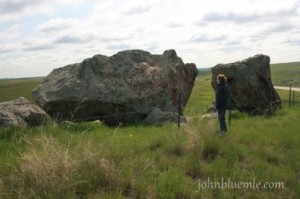 Fig. 3-C. Large granitic erratic about ten miles west of Mandan, Morton County. This is one of the largest erratics in North Dakota. Several pieces of granite, some of them rising ten feet above the ground surface, are all part of what was once a single erratic, which weighed at least 350 tons (but I don’t know how much additional rock may be buried beneath the ground surface). Numerous large granite erratics occur in this part of eastern Morton County. They are all that remains of materials deposited during an old (pre-Wisconsinan) glacial advance.
Old Highway 10 can be seen on the right. My wife, Mary (5’7”) shows the scale. Photo: 6-5-09

Erratics have been used as exploration tools in the search for ore deposits. Copper mines were opened in Finland after copper-bearing erratics were traced back to their source. Analysis of gold-bearing erratics in Maine resulted in the discovery of gold ore deposits in Quebec. I have found occasional erratic boulders in North Dakota containing traces of gold. Such erratics were probably transported to North Dakota from the metal mining districts of Manitoba and Saskatchewan, about 700 miles to the north. 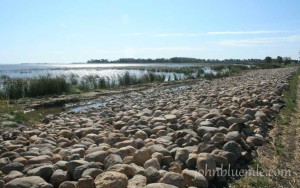 Fig. 3-D. Riprap of erratics along a Devils Lake levee built to protect the town of Minnewaukan, Benson County. Photo: 9-13-2011

Glacial erratics represent the oldest geologic materials found on the surface in North Dakota. Those composed of limestone or dolomite are mainly from 300 to 500 million years old, while some of the igneous or metamorphic erratics may be three or four billion years old. In contrast, the land surface they are lying on could be as young as 12,000 years old in places where erratics lie directly on glacial deposits.

In contrast to the long-distance travelers, boulders of sandstone were moved no more than a few miles by a glacier from nearby locations within the State. Sandstone is less well consolidated than granite or limestone and any extensive glacial transport of sandstone boulders would break them down into smaller fragments, or reduce them to sand. Occasionally, boulders of shale are included in layers of glacial sediment. Most such boulders are quite fragile and have probably been moved only a few tens or hundreds of feet from their original source. 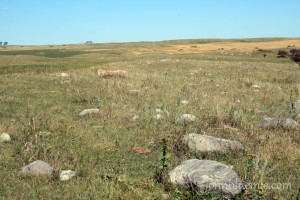 The larger erratics, those three feet or more in diameter, tend to be igneous or metamorphic rocks, such as granite or gneiss. Such rocks are hard and much more resistant to abrasion and fracturing than are sedimentary rocks such as limestone. In some places, especially large granite or quartzite erratics, ten feet or more in diameter are numerous (some are car-sized, measuring up to 20 feet across). A few examples include the walls of the Sheyenne River Valley near Fort Ransom; many of the high bluffs along the Missouri River; along the White Earth River Valley in Mountrail County; and in the valley walls along the Souris River in and near Minot and Velva. Both large and small erratics are particularly abundant near Venturia and Zeeland in McIntosh County. The largest erratic I have seen is located eleven miles south of Calgary, Alberta. Composed of quartzite, and known as the Okotoks Erratic (aka “Big Rock”), it weighs 16,500 tons, stands 30 feet above the surrounding area and is billed as the world’s largest glacial erratic.

Erratics tend to be abundant in places where the ground surface has been washed by the winnowing action of waves along the shores of glacial lakes and modern reservoirs. Wave action removes the finer materials, leaving a lag of cobbles and boulders behind. Examples include areas along the wave-worn shore of glacial Lake Agassiz, near Pisek in Walsh County and Hankinson in Richland County. Erratics are sometimes concentrated along the shores of modern lakes, such as Lakes Addie and Sibley, near Binford in Griggs County and along Devils Lake in Benson County (but many of the erratics along Devils Lake are now submerged). A good place to see erratics is along the levees and causeway roads that have been constructed in response to Devils Lake flooding. Great numbers of erratics have been brought to the area to serve as rip rap along shorelines subject to wave erosion. 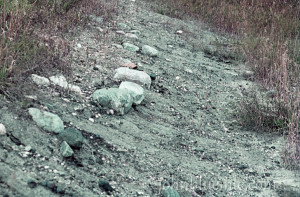 Most erratics are rounded and worn, but some of them have beveled or faceted surfaces. During the course of their journey, the rocks were jostled against one another while in the glacial ice, or against the rock over which the glacier was flowing. As a result of this rubbing, the surfaces were planed smooth. Glacial transport fractured some boulders, producing fresh, angular edges. Some erratics are grooved or polished, a result of abrasion by the moving ice. Coarse sand and gravel within the ice scraped against the boulders, scratching or “striating” them, sometimes as the boulder moved along with the advancing glacial ice or when the glacier flowed over a hard, stationary rock.

In some places where the more-easily eroded glacial deposits have been largely eroded away, erratics may be concentrated on the land surface (eastern Burleigh and western Kidder counties are examples), resulting in a very bouldery landscape. If such a landscape was then glaciated again, and covered by fresh glacial deposits (Late Wisconsinan glacial deposits lying over Early Wisconsinan glacial deposits, for example), the erratics may occur as a buried boulder zone, known as a “boulder pavement.” Boulder pavements are common, but not often discovered, unless an excavation cuts though the boulder zone. This is most likely to happen during road construction. Striated boulders with straight grooves are sometimes found in such “boulder pavements.” If the boulders have not moved, the striations can sometimes be used to determine the direction of glacial flow. 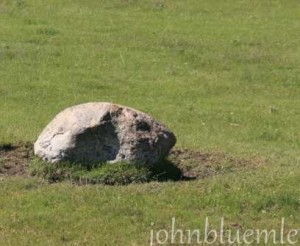 Single large, isolated erratics are sometimes surrounded by depressions, a result of animals such as bison or cattle using them as rubbing stones. Such “buffalo boulders” form as animals rub against the stone, loosening the soil with their hooves. The wind blows the loose soil away, leaving a depression surrounding the rock. Many buffalo boulders are polished from repeated rubbing by the animals.

Erratics aren’t restricted to the surface. They occur throughout the entire thickness of glacial sediments, which averages between 150 and 250 feet thick throughout the northern and eastern parts of North Dakota. Seasonal freezing and thawing causes rocks to work their way upward to the surface from below the plow zone. Every farmer knows that, each spring, a new “crop” of stones has to be removed from the fields. The smaller rocks can be picked up with rock-picking equipment and carried away. Larger erratics are sometimes blasted with explosives and the pieces hauled away. Some of the very largest are simply left in place and avoided. 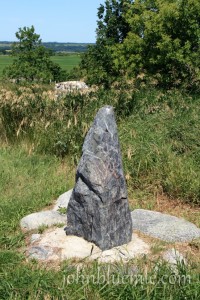 Some erratics are famous. Everyone has heard of Plymouth Rock where the Pilgrims first set foot in the New World on December 21, 1620. In North Dakota we have the Standing Rock, where Highway 46 crosses the Sheyenne River Valley near Fort Ransom. The explorers Nicollet and Fremont, in 1839, noted Standing Rock Hill  on their maps. In northwestern North Dakota, near Alkabo in Divide County, is Writing Rock, which was known by the Sioux as Hoi-waukon or Spirit Rock.

In his book, Blue Highways, a Backroads Tour of Rural America, William Least Heat Moon captured the resignation of farmers to a continual crop of boulders:

East of Fortuna, North Dakota, just eight miles south of Saskatchewan, the high moraine wheat fields took up the whole landscape. There was nothing else, except piles of stones like Viking burial mounds at the verges of tracts and big rock pickers running steely fingers through the glacial soil to glean stone that freezes had heaved to the surface; behind the machines, the fields looked vacuumed. At a filling station, a man who long had farmed the moraine said the great ice sheets had gone away only to get more rock. “They’ll be back. They always come back. What’s to stop them?”