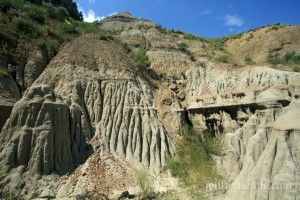 Fig. 8-A. Erosion in the Sentinel Butte Formation, North Unit of Theodore Roosevelt National Park, McKenzie County. Some beds have eroded into a “rilled” micro-topography (center of photo), with vertical grooves, while other beds retain their horizontal layering, which forms tabular concretions in places. A lag covering of reddish nodules covers the surface at the base of slopes. Photo: 7-27-11

Rain and melting snow, wind, frost, and other forces of erosion have carved our badlands into intricate shapes. Since the Little Missouri River began to form the badlands, it has removed an enormous amount of sediment from the area. In the southern part of the badlands, near the river’s headwaters and close to Devils Tower in northeastern Wyoming and adjacent Montana, the river has cut down about 80 feet below the level at which it had been flowing before it was diverted by a glacier farther north. Near Medora, the valley floor is 250 feet lower than the pre-diversion level. Still farther downstream, in the North Unit of Theodore Roosevelt National Park and near the confluence of the Missouri and Little Missouri rivers, and nearer to where the glacier diverted it, the east-trending portion of the Little Missouri River flows at a level that is 650 feet deeper than when it was diverted.

The average rates of erosion in the badlands, assuming they started to form about 640,000 years ago, can be calculated as follows: 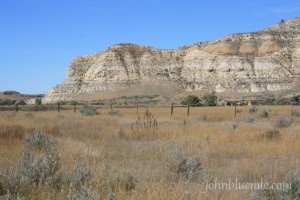 Fig. 8-B. This view is from the Bully Pulpit golf course near Medora, east of the Little Missouri River. The golden beds exposed in the cliff belong to the Bullion Creek Formation, which is the main geologic formation seen in the South Unit of Theodore Roosevelt National Park. Photo: 9-9-2009.

These rates may seem tiny but, over time, erosion has removed a huge amount of sediment. Approximately 40 cubic miles of sediment have been eroded and carried away by the Little Missouri River from the area that is now the badlands. Most of that sediment now lies beneath the water of the Gulf of Mexico.

The rates of erosion I’ve noted are long-term averages, but erosion goes on at highly irregular rates. Locally, considering only the past few hundred years, the badlands have undergone four separate periods of erosion and three periods of deposition. Since about 1936, new gullies have been cut to their present depths. It may seem a paradox that, although running water is the main agent of erosion, badlands formation tends to be most intense when water is in short supply. Why? Because erosion tends to be more vigorous during times of drought when the vegetative cover is too sparse to protect the soil from the occasional rain storm or spring snow melt. When precipitation is sufficient for the growth of heavy vegetation, the soil is better protected from severe erosion. 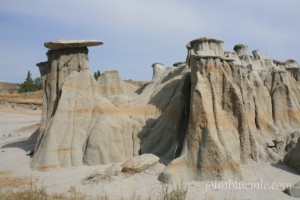 Streams and rivers carry sediment away from the area of the badlands, but most of the actual “on-the-spot” erosion is a result of slopewash. In places where vegetation is sparse, the soil and rock materials are easily weathered, forming loose surfaces that slide downslope easily, slumping and sliding during showers or when the snow cover melts.

The shapes, sizes, and configurations of the hills, buttes, valleys, and other landforms in the badlands are not entirely happenstance. Differences in hardness of the materials result in differences in resistance to erosion. Nodules and concretions help to shape a landscape ranging from beautiful, to desolate – even grotesque. Hard beds of sandstone or clinker cap many of the small buttes. Variations in permeability (permeability is a measure of the ease with which water can move through porous rock) have similar effects; rain and melted snow soak into the more open and permeable sands, resulting in only minimal erosion. When water flows over the surface of tighter, less permeable sediment, such as clay, it abrades and erodes the material, carrying some of it away. The presence or absence and the character of the vegetation also play important roles in governing the rate of erosion. Grass usually helps to control erosion more effectively than does forest vegetation.

The irregular placement of hard nodules and concretions may result in the development of rock-capped pillars, known as “hoodoos,” mushroom-like shapes perched on stalks of clay. In places, slopes are covered by nodules of siderite (iron carbonate). As they weather out of the surrounding materials, becoming concentrated on the surface, the copper-colored nodules form an erosion-resistant armor, which temporarily slows the rate of erosion. Clinker beds are also much more resistant to erosion than are the softer surrounding beds. We commonly see buttes capped by red clinker beds. 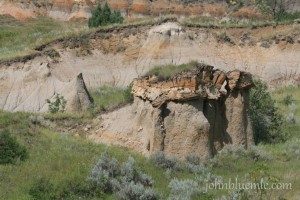 Fig. 8-D. Pedestal, a small “hoodoo” with a limestone concretion caprock, located about a half mile south of Lake Sakakawea in northern McKenzie County. Pods of such freshwater limestone are common in several of the Tertiary formations found in the badlands. They may occur sporadically or as semi-connected layers and they often form small caprocks, such as this one. Photo: 7-23-2010. 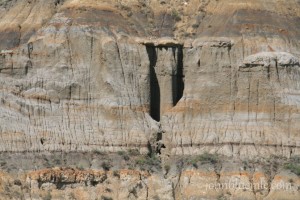 Fig. 8-E. Badlands “pipes,” vertical cavities measuring about 15 feet top to bottom. These pipes are located in northeastern McKenzie County, about a half mile south of Lake Sakakawea. A cross-sectional view of a pipe, as shown here, is rare. More often, they are concealed with the only opening at the top (but notice that the tops of these pipes are partially sealed by a concretion. Photo 7-23-2010.

Erosional “pipes” sometimes form in gullies and ravines where surface runoff is focused. “Piping” results where runoff can flow downward into small cracks and joints.  Pipes are common in places where surface runoff erodes cavities vertically downward through the soft rock. With time, the initial pathways may widen at depth into caves the size of small rooms. The average depth of vertical pipes is about 10 to 15 feet, but some are much deeper. The tops of pipes may be partially concealed making hiking treacherous. I have seen the bones of animals, such as rabbits and deer, at the bottoms of pipes (so far I haven’t seen any human bones). The animals fell into the holes and could not get out.

The geology is only part of the badlands story. The weather and climate, vegetation, animals, birds, insects, sounds and aromas–all of these, along with the human history and the ranching heritage, work together to complete the story of the badlands.

I think the North Dakota badlands are particularly beautiful because of their parklands; wooded areas that occur in draws and on north-facing slopes. Heavy vegetation in the badlands in places like Little Missouri State Park adds to the scenery. Evergreens, such as the Rocky Mountain juniper, ponderosa, and creeping juniper are interspersed with quaking aspen, cottonwood, and poplar. Limber pines are found in the badlands in the southwest corner of the state, near Marmarth.

I’ve hiked and camped in the badlands many times. Evening summer showers accentuate the colors and the clinker beds assume intense shades of red and orange. The fresh, pungent aroma of wet sage and cedar enhance the experience. At night, the stark, intricately eroded pinnacles can seem unreal. In the moonlight or in a night lightning storm, it is easy to imagine the strange shapes as ruins of a magical city, rather than structures of mere sand and clay. Blend in the sound of coyotes conversing and the badlands environment is complete.