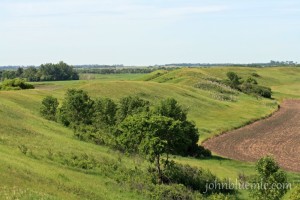 Fig. 5-A. Dahlen Esker, junction of Grand Forks, Walsh, and Nelson counties. This view is to the south, in the direction the stream that deposited the esker was flowing. The esker has a generally accordant crest level, which, however, appears irregular because of numerous minor gaps. The esker consists of a mixture of sand, gravel, till, and boulders, a mixture that resulted from a combination of materials deposited by running water, and debris in the glacier sliding from the ice walls into the esker stream. Photo: 6-26-2009.

Eskers and kames are among the best-known of the various features formed by glaciers and by the running water associated with melting glaciers. Eskers come in all sizes: ridges snaking across the countryside ranging from a few hundred feet to several miles long, and up to 50 or 100 feet high. Kames may be cone or pyramidal-shaped hills as high as a hundred feet, or they may be simply small mounds of material. Kames and eskers are found in most parts of North Dakota that were covered by the Late Wisconsinan glacier.

Eskers were deposited by streams and rivers flowing 1)  on the surface of a glacier, 2) in cracks in the glacial ice or, sometimes, 3) in tunnels beneath the ice. Imagine a river flowing in a valley or crack in the glacier. The banks of the river were formed of ice and, in some places, the river floor might also have been on ice. These Ice-Age rivers and streams deposited gravel and sand in their ice-walled valleys, just as a modern stream deposits sediment in its earthen valley. However, the ice banks of esker rivers eventually melted away, leaving the gravel deposits that had been deposited in the ice-walled valleys, standing as ridges above the surrounding countryside.

North Dakota has thousands of esker ridges. Most are small and non-descript, apparent only from a height (air view) or on air photos, but some eskers are impressive. 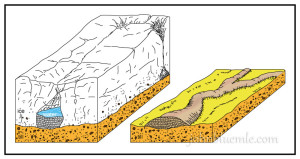 Fig. 5-B. This diagram shows how an esker forms when a stream of meltwater carrying sediment develops beneath a glacier or, in some instances, in an open crack in the glacier. Such a stream may meander a little as it winds its way underneath the glacier, making its way to the front of the ice. The sand and gravel are eventually deposited when the ice melts, and the meltwater flow gradually slows and it drops its sediment load. When the ice melts away, the fluvial sediment is left as a long, narrow, winding ridge, which marks the course of the former subglacial, ice-walled stream.
The stream may be in a crack so that it does not flow in a tunnel, and it may flow on both solid ground in places beneath the glacier and over ice in other places. In places where the stream flowed over ice, the esker ridge may have a gap or dip in its crest because, when the ice beneath the stream bed melted, the overlying stream deposits collapsed.
1-30-2015

One of the best examples of an esker in the U.S. is the Dahlen Esker, located midway between Fordville and Dahlen in the northeastern part of the state. It can be seen as a prominent ridge off to the west where State Highway 32 crosses the Grand Forks-Walsh County line. If the weather is dry, you can drive about a mile on a section-line trail to the crest of the Dahlen Esker (if the fields on either side of the trail are being farmed, be careful not to drive on the crops). 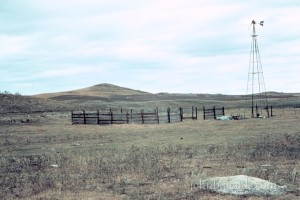 Fig. 5-C. The Jack Lake kame in eastern Foster County, a mile west of the James River and eight miles east of the town of Bordulac. This is a scan of a photo I took in 1962. Notice that much of the kame (the hill in the center of the photo) has been removed for gravel. Photo scan: 1962.

The Dahlen Esker was deposited by a meltwater stream flowing in an ice-walled channel, or possibly through a tunnel in the ice,  near the edge of the glacier. The stream flowed mainly southward, toward the margin of the glacier. The esker is about four miles long, 400 feet wide, and as high as 50 to 80 feet. In some places, native prairie covers the surface. The Dahlen Esker has been described in various geologic reports dating to the late 19th century, but the best description and discussion of the feature was provided by Jack Kume for the North Dakota Geological Survey (“The Dahlen Esker of Grand Forks and Walsh Counties, North Dakota,” Miscellaneous Series 32, 1966).

Other large eskers include ones near Benedict in northeastern McLean County;  another about ten miles southwest of Carrington in Foster County; one immediately west of Hannaford in Griggs  and Barnes counties; one near Dazey in Barnes and Stutsman counties; and an unusual one in Frankhauser Lake in northern Sheridan County. The Frankhauser esker is particularly interesting because it winds its way through a lake, which floods a depression that was formed by ice-thrusting. The esker formed during the ice-thrusting process.

Kames are similar in many ways to eskers. Like eskers, they consist largely of gravel and sand, but they are conical or irregularly shaped hills, rather than long ridges. 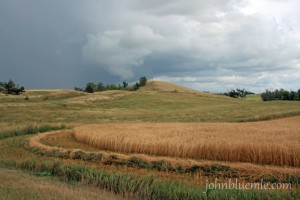 Water flowing on the surface of the glacier, or in esker valleys, plunged into holes in the ice, filling the  holes with a mixture of materials. When the ice eventually melted, the water-deposited materials slumped down, resulting in mounds and conical hills. Kames occur in several places, mainly on the Glaciated Plains, usually in association with ground moraine, but they are sometimes found in areas of dead-ice moraine. A few examples include one in southwestern Richland County, one south of Lidgerwood, and one west of Cayuga in Sargent County. A prominent kame, visible from miles away, is located four miles south of State Highway 200 in eastern Foster County along the west side of the James River. About half of the 60-foot-high feature has been mined for sand and gravel.

Most eskers and kames are composed of coarse, poorly sorted materials, a mixture of sedimentary textures ranging from silt and sand, up to large cobbles or boulders. As they were forming, flowing water deposited flat-lying beds of sand and gravel. Later though, when the ice-walls melted and the bedding collapsed, the bedding became contorted. While a stream was flowing in an ice-walled tunnel or valley, or water was flowing into a hole in the glacier (a “moulin”), cobbles and boulders fell from the melting ice into the water-lain deposits, into the stream or down the moulin. Some eskers have a nearly complete covering of boulders on their surfaces. Most kame or esker deposits contain so many cobbles they are not suitable for construction purposes. Some of them consist of materials suitable for rough fill work. 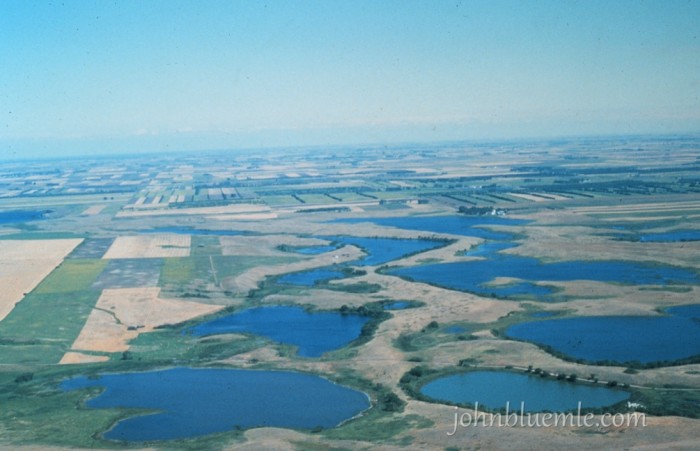 Fig. 5-E. This is an air view of the Frankhauser Esker in northern Sheridan County, about eight miles southwest of the Town of Drake. The esker lies in a lowland that is largely flooded by a lake. The lowland is the result of ice thrusting. The glacier excavated material from what is now the lowland and deposited it a short distance to the southeast, forming a prominent hill. The esker formed when large amounts of groundwater were released as the glacier removed material overlying a large aquifer. The water flowed in a tunnel at the base of the glacier, depositing the gravel and sand in the esker ridge. Photo scan: 1979.