Late in the Cretaceous, beginning about 70 million years ago, and continuing through the Paleocene, until about 56 million years ago, western North Dakota’s climate was subtropical. Trees up to 12 feet in diameter and more than 100 feet tall grew in a setting similar to today’s Dismal Swamp in Virginia, or the Florida Everglades, with meandering rivers, swamps, and vast forested floodplains. Modern evidence for this fossil forest includes widespread seams of lignite coal, fossil tree leaves, pollen, and logs and stumps of petrified wood. 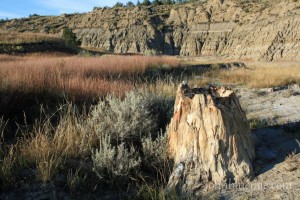 Fig. 4-B. Lignite exposure about six miles southeast of Medora, Billings County. The lignite occurs at the top of the Bullion Creek Formation, which appears light gray in the exposure. The Sentinel Butte Formation, more brown in color, overlies the lignite. Photo 9-09-2009

Lignite is a soft coal that underlies much of the western two-thirds of North Dakota. It began as an accumulation of dead plant material in tropical or semitropical basins: swamps, lagoons and marshes. As the basins filled with stagnant water, the plant debris became submerged so that atmospheric oxygen could not reach it. When the plants died and fell into the water, they began to decay, but before all the plant debris could decompose, the bacterial action causing the decay stopped; most of the bacteria “committed suicide” by filling the stagnant swamp water with their own toxins to such an extent that they died. The only bacteria that remained were ones that did not need oxygen for respiration. However, these “anaerobic” (the word means “living without air”) bacteria are less efficient at decomposition. As a result, large amounts of submerged organic materials did not decompose, and thick beds of peat accumulated.

Streams meandering through western North Dakota during Paleocene time changed course frequently and, when they did so, they sometimes deposited sand and silt on top of the partially decomposed vegetation (peat). The layers of peat were buried beneath thick layers of sediment and the weight of the overlying beds gradually compressed the peat to lignite. Layers of swamp vegetation, some of them over 50 feet thick, were eventually transformed into beds of lignite coal only a few feet thick.

Seams of lignite, horizontal black bands, can be seen eroding out of hillsides today. They range from a few feet to as much as forty feet thick in Slope County and even thicker in Wyoming and Montana. If a peat bog happened to be buried by river sediments before the decay process had progressed very far, and trees were still growing in the swamps, some lignite may have formed, but some of the trees were instead changed into petrified wood. Occasionally, a petrified tree stump, rooted in a lignite bed, can be seen. 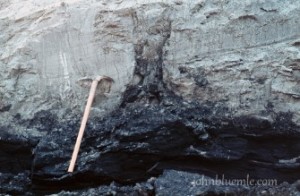 Fig. 4-C. Tree trunk rooted in lignite beds. The tree is buried by silt and sand, which were deposited quickly, thus preserving the tree trunk. The vertical part of the tree grades upward, from lignite at the base, to a combination of lignite and some petrified wood. The pick ax is about four feet long. Photo: 1979

Petrified wood formed when minerals gradually replaced the buried plant material. The petrification process requires rapid burial of the wood to prevent decay. This sometimes happened when rivers shifted course or overflowed their banks, burying a forest floor under a layer of sand and silt. Other times, forests were partially covered by volcanic ash, blown to the area from volcanoes in the rising Rocky Mountains. After burial, ground water seeped through the ash and wood, coating cell walls and filling the intercellular cavities with minerals. 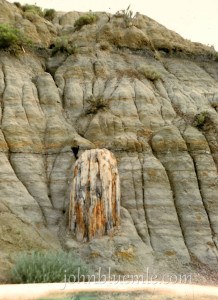 Fig. 4-D. In 1973, along the South Loop Road for Theodore Roosevelt l Park. It was later destroyed by vandals.

Usually, the cellular structure of the wood was destroyed; leaving only a rough cast of the original log, but sometimes growth rings, bark, knots, and even the shapes of the wood’s tiny cells are preserved with remarkable fidelity. This more detailed preservation is possible because some molecules, such as silica and other inorganic materials, are much smaller than organic molecules so, rather than “molecule for molecule” replacement, the organic molecules are coated and surrounded with silica. Cavities in petrified wood may be encrusted with quartz crystals.

Petrified wood ranges from solid, well-silicified specimens to splintery, or “coalified” wood that tends to disintegrate when it is exposed to weathering or it may simply fall apart when you pick it up. The degree of petrification can vary, even within a single specimen. Individual stumps or logs may contain both well-silicified parts and other parts that are still coal. Most of North Dakota’s petrified wood is brown or tan on weathered surfaces and dark brown where freshly broken, but colors can range from white to gray, with streaks of black. Traces of minerals add color to the fossilized wood: yellow, brown and red may indicate iron; black and purple hues suggest carbon or manganese mineralization. 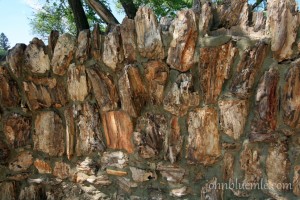 Fig. 4-E. Elgin ND Park bandstand, Grant County. The wall is constructed of petrified wood collected in the area. This is a good place to see a variety of nice specimens. Photo: 6-23-2010

Petrified wood occurs as entire logs or stumps, some standing upright where they once grew, or as scattered limbs and fragments, strewn over the land surface. A fallen log was probably cylindrical when it fell down, but the petrified logs we find today often have oval cross sections because, after they were buried, they became compressed and flattened by the weight of overlying sediments. Most of North Dakota’s fossil wood is Paleocene in age, but petrified wood is also found in smaller amounts in the older Hell Creek Formation and in some of the younger bedrock units.

Fossil leaves, commonly found along with petrified wood, help us to identify the species of trees that grew in and near the swamps where petrified wood is found. Many specimens belong to the plant genus Metasequoia, the dawn redwood. Fossils of dawn redwood were first discovered in 1941, and the tree was thought to be extinct, but living specimens were discovered in south-central China in 1945. Today, the dawn redwood is widely used as an ornamental tree in warmer climates. 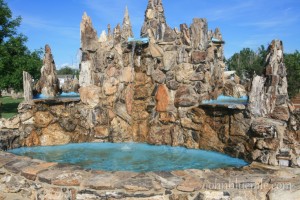 Fig. 4-F. Petrified Wood Park, Lemmon, South Dakota (about a half mile south of the ND-SD state line). Constructed by Ole S. Quammen, the park covers a city block, and was completed in 1932. The petrified wood was collected in both North and South Dakota. Photo: 6-24-2010

During the Paleocene, while Metasequoia trees were growing in North Dakota, a variety of other kinds of vegetation were also present. We know them primarily through studies of fossil pollen and the delicate imprints of leaves in mudstone, siltstone, and carbonaceous shale. Along with the leaf fossils, we find remarkably preserved petrified cones of Sequoia dakotensis (giant evergreen trees), the leaves of tree ferns, and various kinds of petrified wood.

So much fossil wood is strewn over the surface in some places that such areas are referred to as “petrified forests.” North Dakota’s best-known petrified forest is in the South Unit of Theodore Roosevelt National Park, where large numbers of tree stumps have eroded out of the Sentinel Butte Formation. Some stumps are still upright, in the positions in which they grew 60 million years ago. They were preserved when the forest floor was flooded, burying the bases of the trees. The unburied parts of the trunks and branches decayed and disappeared. Petrified stumps may be anchored in a lignite bed or a buried soil horizon, which may mark a former forest or swamp floor.

Petrified wood is often used in landscaping. Many western North Dakota driveways and flower beds are decorated with fine specimens. An outstanding example of a petrified stump, collected in McKenzie County, may be seen in the Long-X Visitor Center in Watford City. The stump, probably bald cypress, is nine feet in diameter and weighs about eight tons. Perhaps the most elaborate use of petrified wood in an ornamental sense is in the Petrified Wood Park in Lemmon, South Dakota. In this park, completed in 1932, O. S. Quammen constructed hundreds of pillars and intricate structures of petrified wood, much of it from North Dakota.

In 1990, the level of Lake Sakakawea was low, revealing several petrified logs weathering out of the Sentinel Butte Formation along the lake shore in Mercer County. Pieces of an 80-foot-long petrified log, collected from the area, along with two stumps from the Amidon area, are displayed on the North Dakota State Capitol grounds. The log and stumps were located southeast of the State Capitol building, in the Centennial Grove for many years, but they were moved to a location east of the Heritage Center in 2014. Still another large petrified log was uncovered during construction of Interstate Highway 94 west of Dickinson, This 120-foot-long, six-foot diameter log (much larger than the one on the State Capitol grounds) was offered to nearby towns as a tourist attraction, but it was reburied when no one wanted it. 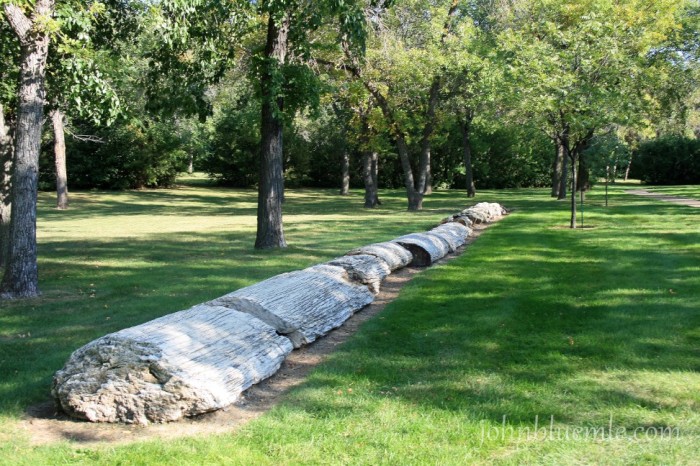 Fig. 4-G. Petrified log displayed on the Capitol campus, Bismarck, prior to being relocated. This 80-foot-long log was collected along the shore of Lake Sakakawea in Mercer County when the reservoir level was low. Even though the tree trunk was round when it fell, the cross-sectional shape now is oval rather than round. The weight of the overlying sediment in which it was buried caused the log to assume its oval shape. Photo: 9-26-2009.