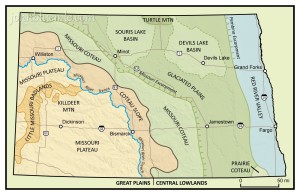 Fig. 12-A. Physiographic map showing the distribution of the landform regions in North Dakota. The main areas of dead-ice moraine are the Missouri Coteau, Turtle Mountain, and the Prairie Coteau. Diagram: 1-29-2015

Geologists tend to concoct unusual names for the things they study. “Dead-ice moraine” may sound odd to some of you. It’s a name for a kind of landform found in parts of North Dakota. Dead-ice moraine sounds odd enough, but can you believe it is found along with things called “doughnuts” and “puckered lips”? First of all, the word “moraine” is an 18th century French word. It was coined by Horace de Saussure to refer to “a heap of earth or stony debris” (de Saussure did not initially realize he was referring to glacial deposits).  I’ll explain the “dead” part of dead-ice moraine later. 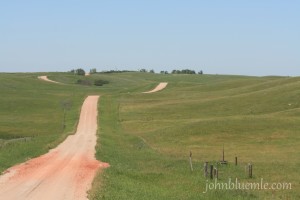 Fig. 12-B. Photo of dead-ice moraine topography on the Missouri Coteau in Mountrail County, about five miles north of Palermo. The view is to the west. The road helps to show the irregularity in the landscape. Photo: 7 – 2 – 2010.

Dead-ice moraine is also referred to as “hummocky collapsed glacial topography” or “stagnation moraine.” It has irregular topography,  formed as the last glaciers were melting at the end of the Ice Age, between about 12,000 and 9,000 years ago. The most extensive area of dead-ice moraine in North Dakota is found on the Missouri Coteau, which extends from the northwest corner to the south-central part of the state (coteau is French for “little hill”) Other extensive areas of dead-ice moraine are Turtle Mountain in north-central North Dakota and the Prairie Coteau in the southeast corner of the state near Lidgerwood. All three areas are uplands that stand above the nearby lower land. The landforms on Turtle Mountain are identical to those on the Missouri Coteau and Prairie Coteau, but Turtle Mountain has a woodland cover, the result of several inches more annual precipitation than the other areas. 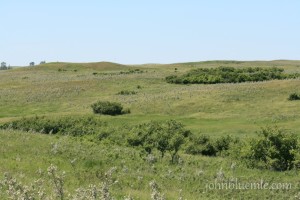 Fig. 12-C. Dead-ice moraine on the Missouri Coteau near Otis about three miles southeast of Ruso in McLean County. Photo: 6-20-2009.

North Dakota’s areas of dead-ice moraine generally make for poor farmland as they are rough and bouldery. They do, however, include a lot of excellent rangeland and thousands of depressions, which may contain lakes, ponds, and sloughs known as prairie potholes . The dead-ice moraine of the Missouri Coteau is known as the prairie-pothole region (the so-called North Dakota “duck factory”). The dead-ice moraine is essentially undrained, except locally. No rivers or streams flow  for any appreciable distance in any of the three dead-ice regions – Turtle Mountain, the Missouri Coteau, or the Prairie Coteau. Dead-ice moraine formed when glaciers advanced against and over steep escarpments as they flowed onto the three upland areas. The land rises as much as 650 feet in little more than a mile along parts of the Missouri Escarpment, which marks the eastern and northeastern edge of the Missouri Coteau. Similar prominent escarpments border the Prairie Coteau and Turtle Mountain in North Dakota and Manitoba, especially the west side of Turtle Mountain near Carbury. When the glaciers advanced over these escarpments, the internal stress resulted in shearing in the ice. The shearing brought large amounts of rock and sediment from beneath the glacier into the ice and to its surface. 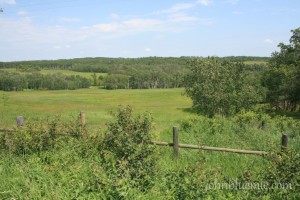 Fig. 12-D. Dead-ice moraine, about four miles west of Lake Metigoshe, Turtle Mountain, Bottineau County. The topography here is essentially the same as that on the Missouri Coteau, but because the area receives several more inches annual precipitation, it is wooded. Photo: 6-30-2010. 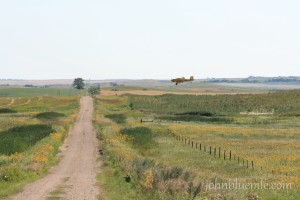 Eventually, as the Ice Age climate moderated, the glaciers became thinner and could no longer flow over higher land, although they kept flowing through lower areas. When the ice on the uplands became detached from still-flowing ice, the glaciers on the uplands stopped advancing and stagnated (or “died”). As the stagnant glacial ice melted, large amounts of sediment that had been dispersed through the ice gradually accumulated on top of the ice, which was several hundred feet thick. The thick covering of sediment on the stagnant glacier helped to insulate the underlying ice, helping to preserve it and prolonging the time it took to melt. As a result, it took several thousand years for the ice to melt. Geologists have determined that insulated, stagnant glacial ice continued to exist on the Turtle Mountain and Missouri Coteau uplands until about 9,000 years ago, nearly 3,000 years after actively moving glaciers had disappeared from North Dakota.

Fig. 12-F. When glaciers advanced onto upland areas such as the Missouri Coteau, the resistance to ice flow that resulted when the glacier edge was forced upward as it pushed onto the upland barrier caused large amounts of subglacial material to be forced into the moving ice. After the glacier on the uplands stopped moving (stagnated), and the ice began to melt, the debris that had been incorporated in the ice remained there. As the ice melted, the debris it contained gradually built up top of the melting stagnant glacier. This resulted in an effective layer of insulation, which greatly slowed the rate at which the remaining ice melted. Diagram: 1-29-2015

In places where the debris on top of the ice was thickest, the glacier was slowest to melt. If little or no insulating debris covered the glacial ice, melting was quicker and the ice had entirely melted away by 12,000 years ago.

Fig. 12-HA. Formation of a “doughnut.” Three stages in the development of a “doughnut” in dead-ice moraine. Sediment fills a hole in the low ice (but ice exists beneath the hole). As the glacier melts, the sediment that had filled the hole slumps down, on top of the ice beneath it (which had not melted, because it is insulated by the material on top). Eventually when the remaining ice finally melts, what was an ice-cored mound of sediment now has a depression in the center, where the ice had been. 1-20-2015

As the stagnant ice on the uplands slowly melted, the glacier surface became more and more irregular. The soupy debris on top of the ice continually slumped and slid, flowing into lower areas, eventually shaping the hummocky, collapsed glacial topography – dead-ice moraine – found today over the uplands. As the stagnant glacial ice melted, and debris slid from higher to lower places, a variety of unusual features resulted. Long ridges formed when sediment slid into cracks in the ice. Such ridges may be straight or irregular, depending on the shape of the cracks. Often, cracks that formed in a rectilinear pattern when the glacial ice was disintegrating, became partly filled with debris that slid into them. Today, we see nearly straight, intersecting ridges, where the ice cracks had been. These ridges are called “disintegration ridges.” Mounds of material collected in holes and depressions in the ice.  If the mounds were cored by ice, when the ice cores melted, the centers of the mounds collapsed, forming circular-shaped ridges – “doughnuts.” Some of the doughnuts are breached on two sides because the debris cover on a mound of ice slid off two sides of the mound. Some geologists have referred to such features as “puckered lips.” Wherever part of the covering of debris slid off an area of ice to a lower place, the newly exposed ice then melted more quickly transforming what had been a hill into a hole or depression. Such reversals of topography continued until all the ice had eventually melted.

Fig. 12-G. Air view of dead-ice moraine, near Woodworth, Stutsman County. This photo was taken in early spring when the snow was mainly melted, but ice still covered most of the pot-hole lakes. Photo scan of University of North Dakota air photo. 1962.

The insulating blanket of debris on top of a stagnant glacier was so thick in places that the cold temperatures of the ice had little or no effect on the surface of the ground. Trees, grasses, and animals lived on the land surface overlying the stagnant glacial ice. As conditions gradually stabilized, water collected in lakes in depressions on the debris-covered glacial ice. Most of the water in the lakes was probably the result of local precipitation rather than from melting ice. Precipitation at the time was greater than it is today, probably 50 or 75 or more inches of rainfall a year. The mean annual temperature was only a few degrees cooler than it is today.

Surrounding the ponds and lakes, the debris on top of a stagnant glacier was forested by spruce, tamarack, birch, and poplar, as well as aquatic mosses and other vegetation, much like parts of northern Minnesota today. This stagnant-ice environment in North Dakota, 10,000 years ago, was in many ways similar to stagnant, sediment-covered glaciers in parts of Alaska today. Fish, clams, and other animals and plants thrived in the numerous lakes. Wooly mammoths, bear, caribou, wapiti, and other large game roamed the broad areas of forested, debris-covered ice. 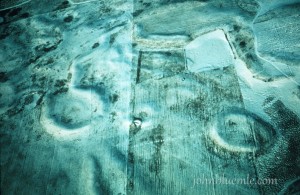 Fig. 12-I. The two circular ridges shown on this air photo are known as “doughnuts,” landforms characteristic of dead-ice moraine. The three-step diagram (Figure 12-H) shows how doughnuts form.

During the years I was mapping North Dakota geology, I occasionally came across Ice Age fossils in North Dakota’s dead-ice moraine: caribou bones, mammoth teeth, fossil fish (mainly perch), and various kinds of snails, but paleontologists studying the Ice Age fauna and flora in detail have found many more kinds of Ice Age fossils than I noticed. 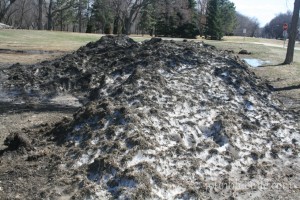 Fig. 12-J. This is a pile of melting snow on the State Capitol grounds, spring of 2013. The discontinuous covering of grass and dirt on top of the snow tends to retard the rate at which it melts. Notice how sediment forms covers on pedestals of melting snow. This behavior is analogous to melting glacial ice, which had a covering of sediment (much thicker than the small amount of covering shown here – the insulating cover on melting stagnant ice may have been hundreds of feet thick, and retarded melting by thousands of years. Photo: 4-27-2013.

Prehistoric people probably lived on the insulated glaciers in North Dakota 10,000 years ago without realizing the ice lay only a few feet below. Or, if they did realize it, they likely accepted it as a normal situation (and I suppose it was normal for that time). Eventually, all the buried ice melted, and all the materials on top of the glacier were lowered to their present position, resulting in the hilly areas of dead-ice moraine we see today.

Fig. 12-K. This is a glacier in Alaska, covered with debris. In the distance, a forest is growing on the debris, which provides insulation from the ice, which is melting, very slowly. This scene might approximate the stagnant glacial ice on Turtle Mountain, as it was melting, about 12,000 years ago. Photoscan UND Geology Dept. 1962