Our Land and How It Formed 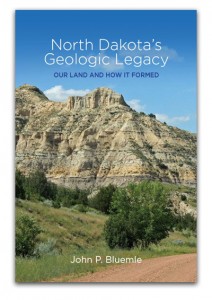 North Dakota’s Geologic Legacy is the story of the landscape — why it looks like it does and how it formed. The book is designed for physical and arm-chair travelers. Most of the features portrayed can be seen from the road. The shape of the land, the geologic materials, the processes that shaped them, the length of time involved in their formation — all of these comprise a fascinating puzzle. North Dakota has a split geologic personality: rugged, erosional badlands and buttes in the southwest, formed during tens of millions of years, juxtaposed with a much younger, rolling landscape shaped by glaciers to the east and north. Separating the two styles of geology is the Missouri River, itself unsure of its own geology, a combination of the young, the very old and time in between. Geology’s influence transcends the mere appearance of the land. It once helped people settling the state decide where to live. Now, early in the 21st century, geology’s challenge is to help us wisely develop our vast mineral and energy resources and deal with climate change and other environmental issues.

North Dakota’s Geologic Legacy: Our Land and How It Formed may also be purchased at the North Dakota Heritage Center in Bismarck and at museums and bookshops across the state.

Purchase at these regional bookstores:

To learn more about the NDSU Press click here.